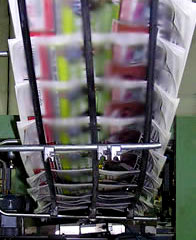 APM Print
© APM Print
The APM printing plant project, coordinated by UNESCO and supported by international donors, proves its professional and economic sustainability.
The APM Print printing plant, run by a non-profit joint venture between the Association for Private Media (APM) and Blic, the largest independent newspaper in Serbia, was officially inaugurated by UNESCO, international donors and the Association of Independent Serbian Publishers on 23 September 2003.

The main goal of the APM Print project was to promote the development of independent print media and to support the wide dissemination of professionally done and accurate information, free of influence of any political party or institution.

Since the fall of 2003, the plant has been providing quality printing services to independent newspapers, members of APM, on fair and reasonable commercial terms. For the last two years, it has been a fully self-sustaining commercial operation, which does not need relying on any donor assistance.

An essential problem of private media in post-conflict or transitional countries today is how to ensure a long-term economic survival. Natasa Vuckovic Lesendric, Chief Executive of APM Print, says that a media project is a commercial operation with a higher goal and a higher level of responsibility. Thus, in order to ensure professional and economic sustainability of the project, proper treatment of initial donor funds must be complemented by responsible management and high level training of all those involved in its implementation.

APM Print has recently become the first newspaper printing plant in Serbia with computer to plate technology, and an investment in a new mailroom system, with inserting lines having the capacity of 120.000 copies per hour, is planned for 2007.